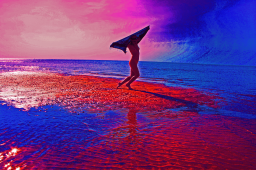 On those trips she paddled in Sam Underwood’s borrowed “station wagon”, a 12 foot Patriot with a cockpit big enough for Eric’s BIG cooler.  Julie impressed her friends with her natural stroke and her speed despite the 20 pound paddle and the sheer mass of the station-wagon.

Kitty further proved her merit by paddling to Cat on several trips in the front of Eric’s Big Boy double.

She has numerous photo modeling credits to her name, most shot on the location of Cat Island.  Kitty resides in Biloxi Ms. and has a top secret day job and an unbelievably well trained chocolate lab, named Milo.